All too often, we (the media, ill-educated ‘fitness professionals’, and probably your favourite health bloggers) target incredibly specific aspects of nutrition, deeming them responsible for ineffective fat loss.

Consider the image below: 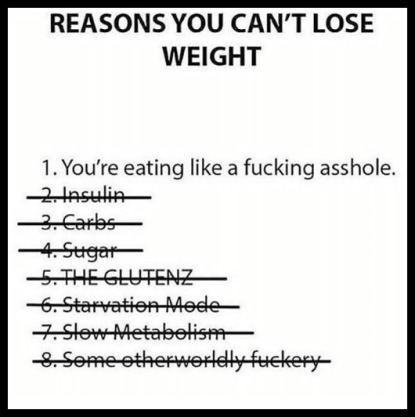 How many times have you heard someone blame one of the above reasons (other than number one) for their inability to lose weight?

The truth is, gluten isn’t making you fat. Sugar, likewise, cannot be solely responsible for weight gain (unless of course you’re eating in a calorie surplus, and 100% of those calories are obtained from sugar alone).

Nine times out of ten, if a member of the general public ‘cuts out gluten’ or ‘goes sugar-free’, they will lose weight. Why? Because they are simultaneously (and subconsciously) cutting out a huge portion of their usually stodge-ridden diet, and likely replacing it with a less calorie-dense alternative. Does this mean that gluten/sugar were directly responsible for making them fat? No, no, no. But the daily cakes, sweets, take outs that contain gluten/sugar (which the subject has now renounced)?  Now we’re talking.

Demonising specific food groups, in itself, demonstrates a lack of awareness on the subject, and it’s a practice that instils unnecessary scaremongering relating to certain aspects of nutrition.

Likewise, blaming basic bodily/hormonal functions for poor weight loss is (in the vast majority of general population cases) just plain stupid. Sally down the road isn’t overweight because she’s insulin-resistant, and your colleague Jeff isn’t piling on the pounds because he skipped breakfast, and his body is subsequently operating in ‘starvation mode’.

Let’s look at the reality…

What Sally didn’t tell you about her diet, is that she spends her afternoon snacking on ‘just a few’ biscuits in the office, which easily total 400 calories every day. Over the course of her five-day work week, that’s an extra 2000 calories. Consider that figure per month – a hefty 8000 cals on biscuits alone. But they were just a ‘little snack’, right?

Jeff, on the other hand, forgot to mention that he makes up for his lack of breakfast by ‘treating’ himself to a sausage roll from the bakery in the afternoon. And we all know that sausage roll tastes better served up with a full fat cola.

Both Sally and Jeff are, of course, completely metaphorical in this instance. But, I hope you can start to understand my point: people are all too quick to seek a ‘reason’ for being overweight, in order to excuse themselves.

Fat loss comes down to consumption and expenditure. We’ve been over this before (if you missed it, read more about the energy balance equation here).

The more you eat, the more calories your body takes in. If an increase in consumption is not met with an increase in expenditure, the energy balance is somewhat out of whack. In simple terms, the excess of calories will be stored as fat.

So, what’s the point in going over the same ol’ nonsense again, Char?

My point is this… We NEED to stop targeting specific food groups, hormones and everything in between, and get to the facts on fat loss. As fitness professionals, it’s our duty to address false claims, marketing ploys and downright stupid theories on the human body.

So, my message is the same as always…

One day, it’ll start to sink in. Promise.

‘Mondays are fine; it’s your life that sucks’.
Things we learned yesterday. 1) I need a tan. 2) This is my new fave outfit. 3) Don’t go swimming with @georginagough unless you want to spend the best part of an hour chasing her round the pool gasping for air. Must. Get. Better.
Thursday night lights 🐸🐸
65kegs moving about for some doubles. Still baby weights compared to most crossfit girls, but there’s a lesson in this nonetheless. I hate doing things I’m crap at. Hate it hate it hate it. Always have. I used to avoid doing the things I wasn’t good at, because I didn’t get any satisfaction if I couldn’t see progress quickly. Since moving back to the UK, my training has come full circle. Now, rather than just doing heavy deadlifts and front squats 74,000 times a week, I’m incorporating variety; a variety which includes all of the things I’m crap at (there are still plentyyyyy). In the past few months, I’ve practiced my oly lifting, started swimming regularly, taught myself how to muscle up (albeit not particularly well just yet), performed handstand walks under fatigue, and even sat on the damn assault bike for some relatively lengthy periods of time. It feels like progress is actually happening (except the assault bike; still my nemesis). I stopped comparing myself to everyone else and just got on with the things I needed to focus on. If I fall off the rig whilst practising gymnastics, or drop a barbell on my head when trying to build some weight in a snatch (these still happen almost daily), then so be it. Just another reminder that everyone has to start somewhere, and although I wish I started all this when I was 16, age 25 is going to have to do. That’s all for now. Go get it hunnies.
Practicing everyday until I’m a little bit less shit.
That moment when you get your first set of four muscle ups but the you think someone was in front of the camera the whole time. 😱😩 Now it’s project be less gymnast, be more @emmapaveleyfitness 🙌🏼
Join me in Mykonos 21st-25th May, for a Strength and Conditioning Retreat. A chance to relax in the sunshine, enjoy freshly prepared food and learn to move better. @navahausretreats focus on more than just the fitness side of things. We support the idea of drinking cocktails whilst watching the sunset. Included in the package: ✨ Accommodation in a luxury villa ✨ All daily food and drink (except dinner where we go out and explore the island 🤩) ✨ Minimum one daily training session with me ✨ Gym access for our strength and conditioning work ✨ Optional core classes, mobility coaching and handstand workshops ✨ Group hikes around the beautiful location Spaces still available. Message me for more information. See you in the sunshine 😉
New programme told me I have to swim once per week. I hate swimming because my tiny little lungs are crap at regulating my breathing. Nonetheless, I was told to swim so (reluctant or not), that’s exactly what I did. Four weeks on, and it’s safe to say I’m not a fish just yet. But every session feels a little bit less crap. So I’m now four steps ahead of being as utterly useless as I was in week one. This got me thinking; imagine if we actually did the things we don’t want to do. Whether they may be related to fitness, nutrition, finances, learning, reading or whatever. Do a little bit, each and every week, and by the end of the year you could be 52 steps ahead of where you were in early January. That’s a lotta steps if you ask me. Get swimming hunnies 🐠
Right, time for a rant. (Plz excuse excessive use of caps). I’ve said it before and I’ll say it again (and again and again). RESISTANCE BANDS ALONE ARE NOT SUFFICIENT TO ‘BUILD YOUR DREAM BUTT’. Banded unicorn dust sparkly fairytale frog-pumps will not provide an adequate stimulus to elicit the ‘booty growth’ you seek. Bodyweight glute bridges and banded abductions may be useful tools as prep work or accessory exercises. However, anyone who claims that these movements alone created their peachy twerker, is either genetically gifted, or taking you for a ride (usually one that involves some kind of financial gain, in the form of merchandise ((bAndZzz)) and/or a ‘home workout plan’). I’ve searched my entire camera roll to provide some (hopefully) rather useful examples of exercises that will certainly aid glute development, when performed correctly. Note: this list is not exhaustive, and not all exercises mentioned below are demonstrated in these videos. 1. Barbell hip thrusts. The holy grail of glute developers. (Disappointed to say I don’t have a single video of myself performing these). 2. The hinge: any variation of deadlift. Conventional, sumo, Romanian, single leg, kettlebell, dumbbell, barbell. 3. Squats. Back squats, front squats, goblet squats. 4. Unilateral movement patterns. Split squats, Bulgarian split squats, FFE split squats, reverse lunges, walking lunges. 5. Box work (still unilateral): step ups, step downs, forwards, lateral. Play with your loading patterns. My best advice is this: ➡️ Stick to your compounds. Record your weights. Chase progress. ➡️ Bulk out your sessions with accessory work as detailed above. ➡️ Play with tempo to alter time under tension, concentrate on eccentric loading. Rant over (for now). Any questions, feel free to shoot me a DM.

Keep up to date by following me on Twitter